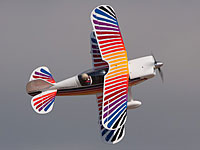 We always learn how to perform new maneuvers by watching the stick movements of a top notch pilot, but what the pilot knows is that there computer mixes is what makes their life easier when controlling the aircraft.  Now we are going to present a few tips that will make it easier for you to perform those same aerobatic tricks. Our main focus this time is on radio programming and setup.  This knowledge  is a key element that enables pilots to fly outrageous 3D maneuvers with a computer radio system.

Expo helps pilots by reducing the stick’s sensitivity at center stick and allowing them to fly more smoothly with larger control throws. Imagine having large, 45-percent throws on a control surface on a plane flying straight and level. You move the stick ? inch, and the control surface moves Ω inch, so the plane veers off-course quite a bit and makes your flight look jerky and erratic.