It is no secret that the advantages of electric motors used with multi engine airplanes far outweigh the disadvantages when compared to glow power. First there is the clean factor; you never have to wipe oil off of your plane when using electric power, unless of course you flew too close to the overly rich glow plane or landed in an oil spill. The other thing is reliability; you never have to worry about getting both motors started and there is only a very rare chance of a motor quitting during the flight. So, let’s see what we need to do to properly set up a good running electric multi-motor plane.

WHAT TO LOOK FOR IN A TWIN

The first thing you need to consider is having an easy-to-reach compartment for the battery pack(s). As with all electric planes, you want to be able to easily remove and install battery packs for changing. The plane just has to have an open area that would be able to fit the packs; you may or may not need to make some type of removable hatch for easy access to this area. It would be a good idea to have the battery compartment somewhere near the CG so the additional weight of the batteries will not need to be compensated by more weight to balance out the plane. Many twin planes will have a center fuselage that will be perfect for this. If the plane you are considering for E-conversion only has space for the batteries near the rear of the fuselage, you may want to consider using a different model.

The second thing to think about is easy access to the motor location or nacelles, especially for ESC placement, which should have some type of airflow going through it. There should also be some easy pathway through the wing for all the wiring you will need to run to the battery and receiver. Once your plane has met these requirements you are ready to install the E-power system. 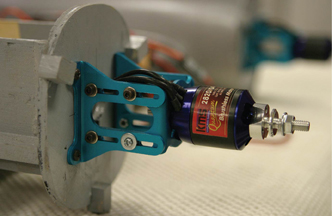 Generally, adding an electric motor to a glow kit is much easier. They take up less room, have fewer cutouts on the cowl, and are easier to install. Here are the motors mounted on the VQ models A-26 using an adjustable mount.

One of the hardest parts of doing an electric setup is just trying to figure out what motor combination to use for your plane. Fortunately for us modelers, many manufacturers are more than willing to help you out. A simple phone call is all you need to make to find just the right motor for your conversion. Many hobby shops and manufacturers can tell you what motor will be right for your plane if you let them know what size gas or glow motor the plane is made for. You will generally have a couple of equivalent motors that would work well for your application. For me, I like to use the stronger of the selections just to make sure the motors are never over-stressed, which could happen if you pick the weaker motors and rely on their maximum performance all the time just to fly the aircraft.

Once you have the motors selected the rest falls into place. The ESC needs to be the right type for the motor (brushed or brushless) and be able to handle the maximum about of current the motor will require. For example, let’s say you have a motor that normally runs at about 30 to 40 amps but has a maximum limit of 50 amps; you should get an ESC that can handle 50 amps. 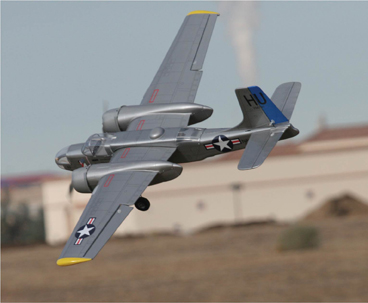 This A-26 is the perfect candidate for electric conversion. Plenty of room to run the wires through the wings and the batteries are located under the center hatch on top of the wing.

Depending on how you wire up the system, the battery pack will either be used for one or both of the motors, or you will have two packs feeding power into all motors. When using one battery for both motors (or four if you have a heavy bomber) you will need a battery that can handle the power draw of all the motors. First, consider the voltage requirements of the motors. If your motors can run on four to five cells then that is all the battery will need to be. You will not need eight to 10 cells because you are running two motors.

However, the amp draw will need to be doubled or quadrupled depending on how many motors you have. For example, if you have two motors, each one draws 40 amps continually so you will need a battery that can keep up with an 80A continuous draw. How do you find out the amp draw of a battery? You must multiply the battery pack’s capacity by its “C” rating. If I have a 4000mAh LiPo battery pack that is rated at 15C, that pack can only have a maximum of 60000mAh (15×4000 = 60000mAh) or 60 amps pulled from it at any time. This means that this battery pack will not work for an 80A setup. But, if that same LiPo pack has a 20C discharge rate (20×4000 = 80000mAh) it could support an 80A draw. The only problem with this pack combination is if the motors pull more than 80 amps, you run the risk of heating up the pack from drawing too much current and puffing it, thus ruining the battery pack. I like to pick my battery power combination with a little extra breathing room so if my power system pulls more amps than expected I have some reserve amps in the pack. In this example I would use a LiPo pack or combination of packs that would equal 5000mAh at 20C allowing me to pull up to 100 amps from the pack at any time. The advantage here is if the system does pull more then 80 amps the batteries can handle it, and because the batteries are not performing at their maximum peak they run a lot cooler.

The beauty of using LiPo batteries for power is that they are lightweight, give longer running times and can be wired in any combination. This is very advantageous for us when we are running more than one motor. When connecting your batteries in series you are doubling the voltage while maintaining the same capacity rating (amp hours). This is done by connecting between the negative of the first battery and the positive of the second battery. Then run the negative wire off the open connector of the first battery to the negative of the motor, and then run the positive off the open connector of the second battery to the positive of the motor. You would use this type of connection if your motor needs 22.2 volts to operate. Simply connect two 11.1V batteries (3-cell packs) together (with the same capacity), in series to make a 22.2V (6-cell) pack.

But in most cases, you will be wiring up the packs in parallel, which would double the capacity (amp hours) of the battery while maintaining the voltage of one individual pack. This can be accomplished by using a Y-connector between two or more batteries that connects the positives of both batteries and the negatives of both batteries together. Then have a positive and negative wire go from one of the batteries to the motor. This is how we can use two batteries together to meet the current draw required by our multi-motors. In our example above we could connect two 2500mAh 5-cell (18.5V) packs together in parallel and make a 5000mAh 5-cell battery. That would be more than enough to power the needs of our two motors. 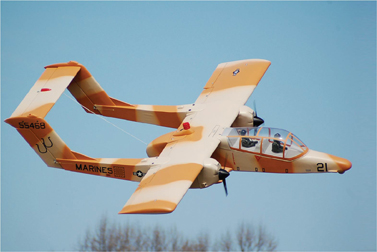 Most twins, such as this OV-10D Bronco, have a roomy fuselage in the center of the wing that is a perfect place for a battery compartment.

You do have a couple of options on how you can connect the battery packs to the motors. This first option is to connect a proper-size battery to each motor. The advantage here is that each motor has its own power source and a simple wiring setup. Just connect a separate battery pack (of the required size) to each motor/ESC. The disadvantage is that as the battery packs get older they may discharge at different rates, causing one motor to be weaker than the other. This creates more torque on one side of the aircraft, and in some cases this could roll the plane over in a death spin, especially if one battery quits at slower speeds.

The other connection option is to use a Y-connector to join both motors to one larger pack of the required size to feed both motors. The advantage here is that when the battery is running low or is weaker, both motors will reflect that in their performance, maintaining equal torque on both sides of the aircraft at all times. The disadvantage is a little more complicated wiring setup. On a four-motor plane, such as a B-17, use a Y-connector to join the inboard motors to one battery pack and the outboard motors to another battery pack. That way even if one battery totally fails, you will still have motors on both sides of the plane working. 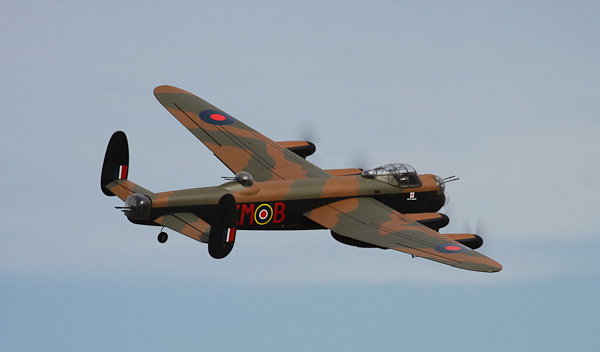 This Lancaster from ASM Models, has both the inboard motors attached by Y-harness to two batteries while the outboard ones are attached to two different batteries. All four battery packs are stored in the fuselage in the nose right in front of the CG point to balance out this large plane.

CONNECTING MULTI-MOTORS TO THE RECEIVER

As you can see, wiring for multi-motor planes is not all that hard. Now you have no reason not to convert your next multi-engine plane to great E-power performance. Enjoy the reliability electric power offers and enjoy more flying time.