Regardless of the type of airplane you fly, whether it’s a warbird, an EDF jet or a Piper Cub, nearly all aerobatic maneuvers involve some inverted flight. So to keep improving your flight skills, you need to develop proficiency with inverted flight. To start, let’s do away with the often repeated reference to the elevator being reversed when the plane is upside-down. It is that kind of thinking that causes people to become confused and second-guess themselves, or worse! A much simpler and more effective approach is to remember that you will always push forward-elevator during inverted flight. If the plane descends, push harder (you are not pushing enough). When it climbs, push less (you are pushing too much). The ailerons, of course, work the same whether upright or inverted.

Learning to fly inverted is also easier if you throttle back to a more moderate airspeed. Not only will you have more time to think, but a lower airspeed also will require you to push more forward-elevator to hold the plane level and thus provide a greater range of feel for the elevator. It’s also smart to enter the first few attempts from a slight climb to reduce your initial anxiety. As your confidence and technique improve, you can gradually increase throttle to start achieving the airspeeds needed for aerobatics, and the climbing entry can be gradually eliminated.

The next most important step is to develop the habit of recovering from inverted by rolling upright with the aileron, especially if you become confused. In fact, rolling upright should be your response anytime you are not comfortable. In the event that you become confused, it is usually best to input aileron in whatever direction you prefer and thus more quickly upright the airplane than you would if you contemplate which way to roll and then act. Developing the habit of recovering from inverted with aileron becomes routine very quickly simply by repeating the exercise of rolling inverted for two or three seconds and then rolling back to upright.

Another crucial element during your initial inverted practice is making sure that the 1/2 roll to inverted is completed with the wings perfectly level before you start to push, because pushing with the wings banked will initiate an unintentional turn that will almost certainly lead to some confusion.

I have stressed the importance of maintaining consistent parallel lines with the runway during aerobatics again and again in previous articles, and so I won’t repeat it here. Let it just be said that the majority of the problems that people experience when learning aerobatics would be solved more quickly-or plain disappear!-if more emphasis was placed on better positioning! Good positioning is the reason why the good guys make it look “easy” and it is what is required to be successful at the advanced level. Thus, it is wise to take the time to cement a foundation of consistently flying straight lines back and forth parallel with the runway before attempting inverted flight. 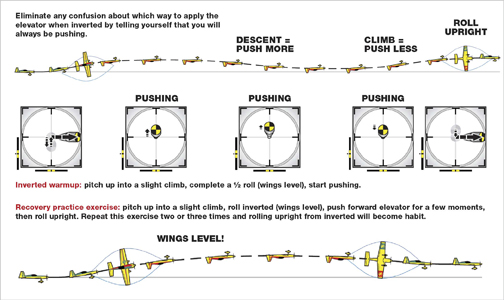