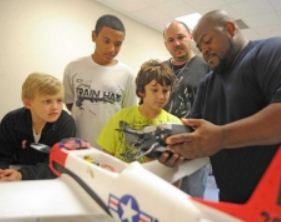 We love this story about how the Rotors and Props Hobby Club in Grovetown, Georgia is helping troubled youth to “fly right” — pun intended. Just in time for the holidays, this  story by Valerie Rowell at the Columbia County News-Times will warm your heart. [Note: we’re tracking down this hobby club so we can give them some MAN books and subscriptions for club members and the kids; if you’re a member or know someone who is, please send us a note at MAN@airage.com!]

A Columbia County Juvenile Court program is helping offenders become amateur pilots. The Taking Flight in the Right Direction program is designed to give young people a clearer understanding of the consequences of their decisions, Chief Probation Officer Margaret Adams said. Seven non-violent juvenile offenders were sentenced to the first 10-week session, which started in October. Parents also are required to attend the semi-weekly class at Liberty Park Community Center in Grovetown. “It’s a thing that both parents and kids are very involved in,” Adams said. “It just strengthens the dynamic between the parent and the kids and opens up a lot of communication.” 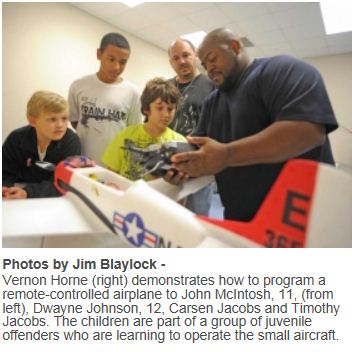 Vernon Horne, a model airplane and helicopter pilot, leads the class. He’s helped the children and their parents build two remote control T-28 Trojan airplanes that they’ll fly at Saturday’s exhibition. Horne helps the children practice using a flight simulator hooked up to a large-screen television. “The hobbyists call it remote control,” Horne said. “I tell (the children) that you have to remain in control. You have to know what to do in any given situation at any given time. You get that by practice. If you practice doing the right things, you’ll get the right outcomes.” In addition to simulated flight, the child-parent teams work with other pairs to build the planes and work on projects together.

Mary Pennington, of Martinez, said she’s impressed that her son Dwayne, 12, and the other children work together. “They all want to excel,” she said. “He loves it. I have never seen him excited about something like this. He wants to earn fly time.” Pennington said Horne relates the model flying to real problems in a way the children understand. Cheryl McIntosh, of Martinez, said she also has noticed a change in her son, John, 11. “He’s been a little more respectful,” McIntosh said.

Horne said the program, which he’s presented twice to Fort Gordon’s Youth Challenge, is designed to show children they need control and gives them a taste of success. Learning to fly is difficult but the children learn that practice leads to improvement and, hopefully, flight. Adams said she hopes the children learn life skills like improved decision-making, self-discipline and responsibility as well as bonding with their parents. “What we want them to learn is that control is in their hands,” Adams said. 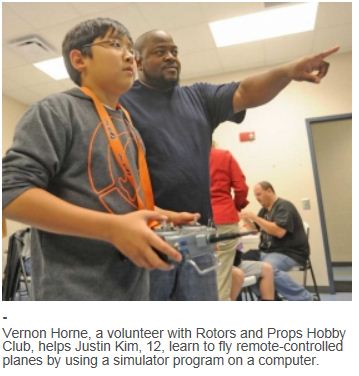